If you’re interested in the source material, help us by getting them from the links below: 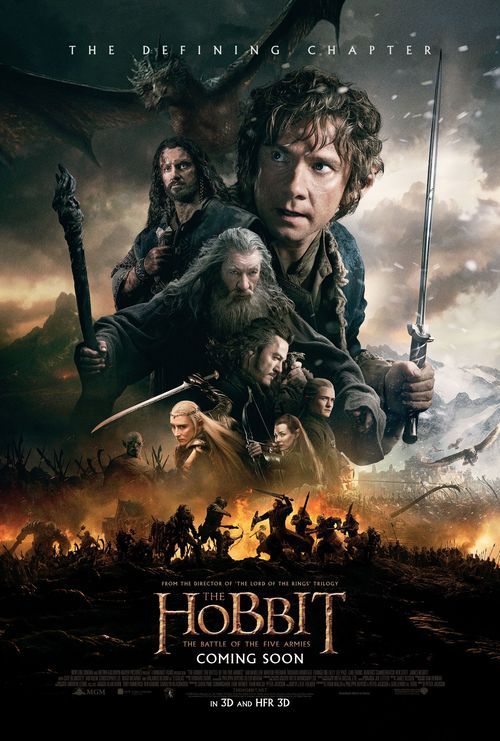 It is the final installment of the three part film adapted from The Hobbit by J.R.R. Tolkien. Directed by Peter Jackson The Battle of the Five Armies follows The Desolation of Smaug and An Unexpected Journey and stars Ian McKellen, Luke Evans, Martin Freeman, Richard Armitage, Lee Pace, Benedict Cumberbatch, Evangeline Lily & Orlando Bloom. 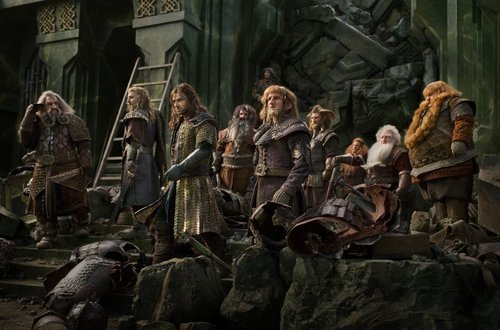 Premise: Bilbo and Company are forced to engage in a war against an array of combatants and keep the terrifying Smaug from acquiring a kingdom of treasure and obliterating all of Middle-Earth. 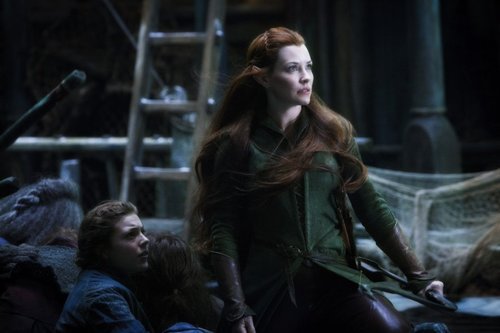 Review: Bilbo and the Dwarves have reached and reconquered Erebor. The old Dwarf kingdom is filled with gold and jewels, and is strategically placed in middle earth so of course the Humans, the Elves, the Orcs will go to war for it. They all have different reasons to want Erebor, some more legitimate than others, and it leads to a big, impressive, entertaining battle. 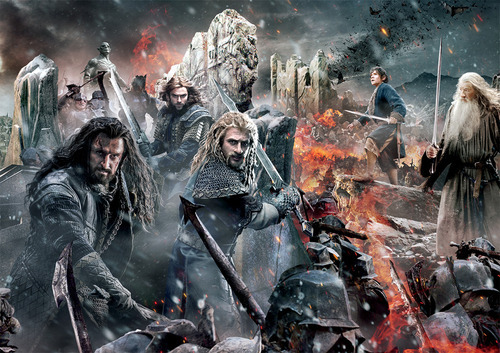 The film is awesome, thrilling, action packed with epic nicely choreographed and CGI-ed battles. It’s waves after waves of amazing battle scenes and storytelling. It’s not just epic battle scenes, the movie also pulls on your heartstrings, the drama is at its peak. The heartbreaking moments made sense and did not overtake the story and turned it into a depressing movie. I was sad but satisfied. 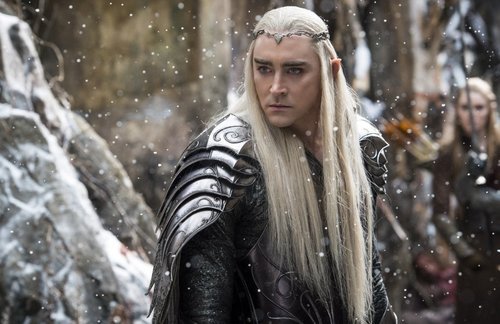 The cast was really good, they all had their moments, I’m now more familiar with the Dwarves because they had more substance, they were no longer extras in this big movie. Richard Armitage was so convincing as Thorin. He managed to annoy me with this character and bring me to almost hate Thorin before reeling it back to a point where I respected the character and sort of liked him in the end. Martin Freeman is The Best Bilbo that could have been cast. Cate Blanchett, Hugo Weaving and Christopher Lee were great, it was the best unexpected scene ever and it completely make sense with the Lord of the Rings.

I’m not a sucker for love interests or love triangles in movies but Kili (Aiden Turner) and Tauriel (Evangeline Lily) were one of the best part of the movies. I said it before, I’ll say it again, I’m glad she was added to the movies, it wasn’t such a sausage fest with her in it. She’s badass, interesting, and helped make the movies better. Their love interest added to the drama and apprehension during the movie.

The Hobbit series is done and we now have a six movies saga that you can dare your friends to watch with you in one day. Anyway use the comment section to tell What did you thin of the battle of the five armies? And of The trilogy in general?
10 December 201421 September 2021 ~ Garc ~ Leave a comment

Premise: The dwarves, along with Bilbo Baggins and Gandalf the Grey, continue their quest to reclaim Erebor, their homeland, from Smaug. Bilbo Baggins is in possession of a mysterious and magical ring.

Review: A similar method to An Unexpected Journey was used to introduce this movie before dived right back into the action. This time the flash back didn’t last as long and it answered a question I had about Gandalf & Thorin. The second installment is better, action packed, a real sequel to a movie franchise, they’ve upped the scale and made it more impressive.
The running theme of this story is that History has a way of repeating itself and peace only last as long as it takes to prepare for war. I can easily illustrate what I’m saying, it seems defeated foes have their way of coming back, it seems Bilbo also got caught in a spider’s web, and there was also an interracial love interest blooming. This one is more subtle but it leads up to a weird love triangle, in which this time there’s some unrequited love thrown in the mix (you know what I’m talking about it you’ve seen the movie).

The Dwarves are impressive, I mean, I did not realize the scale of their might until I saw Smaug in the mountain. I know there were a lot of them living in their back in the day but boy there were filthy rich. And what about the size of that place? It told me one thing, they were suffering from some serious megalomania and Napoleon syndrome. They really are greedy little beasts. I understand the Dwarves a little bit better, hell if I had that much gold and jewels and it was taken from me, of course I would want to get it all back.
Martin Freeman is showing us he can carry a franchise, in TheHobbit: AnUnexpectedJourneyhe showed that he was Bilbo Baggins, the only Bilbo that made sense. In The Hobbit: Desolation of Smaug he gave Bilbo more depth, an edge where the darkness crept to the surface, a daring quality that Frodo never had. I guess Frodo was the sensitive soul of the family. Bilbo revealed himself to be sneakier and more brave in this one.
Thorin (Richard Armitage) is still, if not more, annoying, the other dwarves are showing more personality, I can now tell apart four of them. Lee Pace, was regal, a real king, firm and mysterious. Gandalf is proving to be more resourceful and powerful in the second installment, I guess he really was older and “wiser” in The Lord of the Rings trilogy, which translated as “I’m a wizard but I won’t be using my powers much don’t have.”
Tauriel is a very good addition to the mix, it was only when she came in that I realize that the movie is a bit of sausage fest, yes Cate Blanchett was in it but i think she served the same purpose. Evangeline Lily’s character might have been added for the sake of having a female in the cast but she is in no way a weird stand in that has no business doing there, she is bad-ass, incredible and elevates the movie. The same goes for Legolas (Orlando Bloom) but she clearly out-shined him.
Smaug was incredible in this movie, one of the most memorable moment of this movie. Benedict Cumberbatch did an amazing job voicing Smaug. This Dragon looked awesome, he was menacing, dominating, enormous and mighty. The dialogues between Bilbo and Smaug were just really good.
In the end The Desolation of Smaug was good, better than the first. I was thrilled and impressed and now wish that I had seen in the cinemas.
The next step will be my review of The Battle of the Five Armies but first tell me what your thoughts about the movie? You can tweet me @wornoutspines or comment in the section bellow?
9 December 201421 September 2021 ~ Garc ~ 1 Comment

Based partly on J.R.R. Tolkien’s book The Hobbit, or There and Back Again and partly on the appendices to The Return of the King. The film was directed by Peter Jackson and stars Ian McKellen, Martin Freeman, Luke Evans, Lee Pace, and Richard Armitage among a slew of talented actors.

Premise: A reluctant hobbit, Bilbo Baggins, sets out to the Lonely Mountain with a spirited group of dwarves to reclaim their mountain home – and the gold within it – from the dragon Smaug. This movie takes place before the Lord of The Rings.

Review: I had seen the first Hobbit movie around the time it came out and sort of like it. Mind you I have never been a big fan of the franchise so I wasn’t waiting for years for this film to be made. My only interest in this one was due to the fact that The Lord of the Rings films were entertaining and impressive.

The film is like The Lord of the Rings in the sense that it is epic, with great set pieces, beautiful landscapes and CGI, interesting characters and a decent screenplay. As the movie started I realized it was basically about money, power and also revenge. I honestly did not expect to see something so trivial in these movies. I was maybe too young when the others came out to see these things but I watched The Hobbit with grown up eyes and enjoyed.

The extremely long cast list scared me. I was afraid the film would be overcrowded and hard to follow but it’s not. Of course, I know there are thirteen Dwarves but I know the name of one – Thorin – and can describe at least two. As for the returning cast, it’s great that they’re in the movie because at least you have characters you care about so that you don’t have to “waste” your time with the others whose names pretty much sound the same.

Freeman owns Bilbo, he’s likable and fun to watch. I did not think for a second about Ian Holm who played an older version of Bilbo Baggins and is also in the film. Thorin (Armitage) was annoying, badass but still annoying. He stood out because he was getting on my nerves. Gandalf was much more proactive and badass in this movie, I really liked it. Gollum (Andy Serkis) stole the movie, he’s more dangerous and creepy

In conclusion, An Unexpected Journey is entertaining but it is stretched. Some scene could have cut short. It starts really slowly but when the action takes off, it really does. The only thing I miss and hope to see in the other movies – because I have not watched them yet – is the comedic, funny scenes The Lord of the Rings movies had. The Hobbit may not be as dark and gritty but it’s not as funny as the previous movies, or maybe I grew up.

So the Hobbit I know it’s been years since it came out but we can spark up a conversation about the movie because we’ll get to all of them soon. Tweet me @wornoutspines or share your thoughts in comment section

The Hobbit: The Battle of the Five Armies: The Company of Thorin has reached Smaug’s lair; but can Bilbo and the Dwarves reclaim Erebor and the treasure? And, if so, can they hold on to it?

The final battle is on and even though we all know what’s to come. I am still interesting to see it.