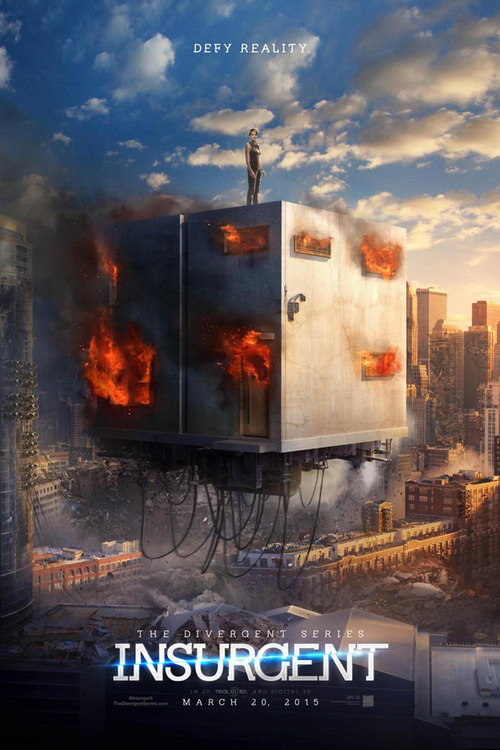 Premise: Beatrice Prior must confront her inner demons and continue her fight against a powerful alliance which threatens to tear her society apart.

Review: Divergent – the first book – was interesting but the first movie was even better, way better if you ask me. They managed to cast great actors and make a realistic futuristic movie. Despite having a different director Insurgent

looks familiar I easily slipped back into a world I was already familiar with. The movie is visually impressive, even though it looks a bit too CGI-ish for my taste, making the film not as grounded as Divergent was so at times it feels like watching a video game or an animated version of it.

The acting is OK, I mean it’s a good cast so what they bring to the table fits the story and the emotional journey these characters have been through. But – because of course there is one – Theo James’ (Four) age is seriously starting to show. I know he’s only 30 – and Teller is 28 – but in the first movie it didn’t seem as weird that he’s with Tris (Woodley) but next to 46 years old Naomi Watts, who looks 35, maybe forty, it’s really weird. They look like brothers and sisters at best, they could have aged Watts or cast someone else completely because how young was she when she had him? 12?
It will be even weirder to see her playing opposite Ray Stevenson (Marcus Eaton) – Four’s dad – who’ll look like a dirty old man next to her, which is probably why we’ll see very little of that.

I wish these aspects of the film were the only ones I had a problem with but on top of all of that Insurgent lacks rhythm. It’s missing the slow, intense build up in which the tension and the action grows to an entertaining climax but it never doesn’t. Don’t get me wrong it is action-packed – kinda -, a rich adventure of a film but whenever the tension builds up it quickly dies down to go back up again at some point and that’s how it is throughout the movie. It comes and goes in waves but never rides on the high the previous action scenes gave you.

Although, it’s faithful to the book Insurgent was a bit of a disappointment I expected better. It’s only slightly more entertaining than the book, they could have done better.

What did you think?