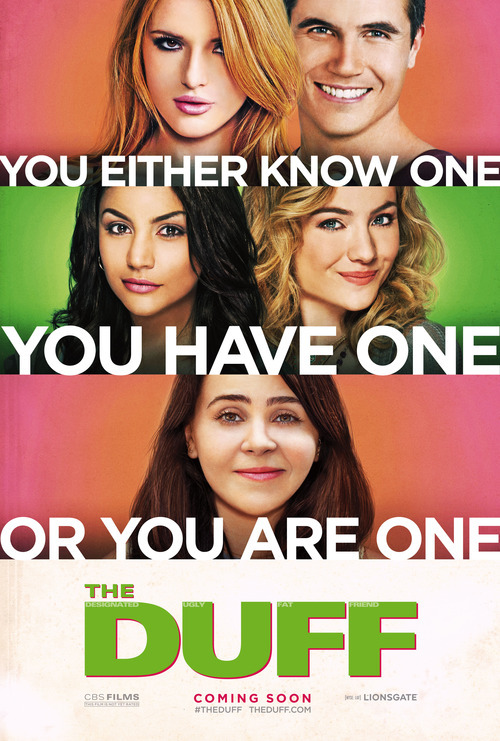 Based on a book by Kody Keplinger, adapted to the big screen by Josh A. Cagan and directed by Ari Sandel, The DUFF stars Mae Whitman, Robbie Amell, Bella Thorne, Alisson Janney & Ken Jeong.

Premise: Bianca is a content high school senior whose world is shattered when she learns the student body knows her as ‘The DUFF’ (Designated Ugly Fat Friend) to her prettier, more popular friends. Now, despite the words of caution from her favorite teacher, she puts aside the potential distraction of her crush, Toby, and enlists Wesley, a slick but charming jock, to help reinvent herself. To save her senior year from turning into a total disaster, Bianca must find the confidence to overthrow the school’s ruthless label maker Madison and remind everyone that no matter what people look or act like, we are all someone’s DUFF.

Review: The DUFF is quite entertaining and has a really nice poignant message. The film captures life, I mean the characters, and I’m mostly refering to Wesley (Robbie Amell) and Bianca (Mae Whitman), are realistic, humanized. I got a weird sense that I was watching people I knew and not a stereotypical film version of them. The movie has that documentary feel to it and it’s due to how the leads portrayed their characters and how easy it is to relate to them.

The only real disappointment I have with the movie is that I thought it would be funnier. It’s still a comedy but it’s a little more serious than I expected. Watching the trailer I thought that I would laugh a hell of a lot more, specially when you look at the established comedic cast in it. Whitman and Amell do have good comedic timing and The DUFF is fairly funny but the quality of the jokes are not as high as I hopped they would be.

The story is intelligent, insightful, and kind of funny but it’s still very predictable. The DUFF is on the edge of being great but it’s not.

One thought on “The DUFF | Review”